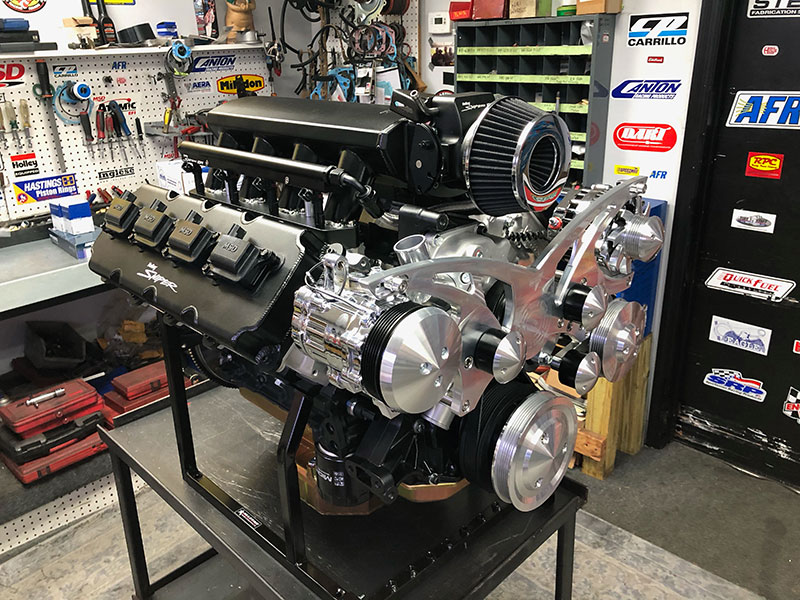 Proformance Unlimited offers a full line of custom built Gen 3 based turn-key drop in ready crate engines designed to swap into hot rods and muscle cars. Where new school performance meets old school looks. We have developed a complete line of fuel injected Gen III based power plants to fit almost everyone’s needs. If you don’t see something you want give us a call and we will design it for you. Our vision on these engines is to bring back the really cool looks from yesteryears engines with today’s reliability an power. Take your time checking out our youtube videos and engine package designs. We are well known for our high quality, reliable, show car quality engine builds.

Whether your vehicle is a Dodge Charger, or the sharp tooth Barracuda or even a timeless 60’s classic, here at Custom Crate Engines, we are here to help design and build the combination that best suits your vehicles needs. Please browse our crate engine combinations listed below or let us custom design one for you. Custom Crate Engines is best known for our precision custom designs. So if you are looking for a special custom built crate engine call Doug or Steve and we will be happy to answer any of your questions.

The 5.7L HEMI was released for model year 2003 on the Dodge Ram 1500, 2500, and 3500 pickup trucks to complement the Magnum 5.9 engine. As of 2004 it was the only available gasoline engine in the Ram Heavy Duty. Chrysler later made the 5.7 L Hemi available in all models of the 2004 Dodge Ram, Dodge Durango, the 2005 Chrysler 300C, Dodge Magnum R/T, Jeep Grand Cherokee, the 2006 Dodge Charger R/T, Jeep Commander, the 2007 Chrysler Aspen, and the 2009 Dodge Challenger R/T. For manual transmission applications (Challenger and 3/4- and 1-ton Ram pickups), cylinder deactivation is not included.

The 6.1L Hemi is also available in a 369.7CI version.The engine’s bore x stroke is 4.055 in × 3.579 in and many other changes were made to allow it to produce 425 bhp at 6,200 rpm and 420 lb⋅ft at 4,800 rpm. The engine block is different from the 5.7, with revised coolant channels and oil jets to cool the pistons. A forged crankshaft, lighter pistons and strengthened connecting rods aid durability. A cast aluminium intake manifold is tuned for high-rpm power and does not include variable-length technology.

The 6.2L Hellcat Chrysler introduced an all-new high performance supercharged variant of the Hemi engine, called the Hellcat (named after the Grumman F6F Hellcat). It features the same 4.09 in bore as the 6.4 L Hemi and the same 3.578 in stroke as the 5.7L, giving it a total displacement of 376.3 The supercharger is a 145 cu in twin-screw IHI unit with integrated charge coolers, capable of producing 11.6 psi of boost. This engine is rated at 707 bhp at 6,000 rpm and 650 lb⋅ft at 4,000 rpm of torque and has a compression ratio of 9.5:1. This engine was the most powerful engine produced by Chrysler as well as the most powerful production engine ever in a muscle car until the Dodge Demon was introduced.

The 6.2L Demon version of the Hemi V8 features a number of improvements over the Hellcat variant. It is fitted with a larger, 2.7 litre twin-screw supercharger, as well as reinforced reciprocating components, a new camshaft, and several other valvetrain upgrades. With these improvements, the Challenger SRT Demon is rated at 808 horsepower on 91-octane pump gasoline, and 840 horsepower when running on 100-octane unleaded racing gasoline. Cooling is aided by a functional Air-Grabber hood scoop, as well as a unique charge cooling system which makes use of the air-conditioning coolant to lower the intake charge air temperature. High-speed launches are assisted by a factory line-lock system, which allows the car to perform a burnout to warm the rear tires, the first transmission brake to be installed in a production car, and the Torque Reserve Launch System.

PROFORMANCE UNLIMITED INC. RESERVES THE RIGHT TO MAKE CHANGES IN DESIGN OR TO MAKE ADDITIONS TO OR IMPROVEMENTS UPON ANY OF ITS PRODUCTS AT ANY TIME WITHOUT INCURRING ANY OBLIGATION WHATSOEVER TO INSTALL THE SAME OR IMPROVEMENT UPON PRODUCTS PREVIOUSLY MANUFACTURED. OCCASIONALLY DEPENDING ON AVAILABILITY, PARTS MAY BE SUBSTITUTED THAT WILL NOT EFFECT PRICE, PERFORMANCE, APPEARANCE OR QUALITY OF THE PRODUCT.
*Engine shown with optional upgrades