After a very long and tumultuous journey, 2016 marked Sue Pellegrino’s baptism by fire when she entered her 1966 Mustang fastback into its first car show. To her surprise, she took a First Place trophy for her efforts, and later found out that the coordinator of the show had told her husband, Tom, “I gotta tell you, when I first heard from your wife wanting to enter, I figured she would be some chick whose daddy bought her a new Mustang. Then she sent me pictures of the car and I thought, Dang! This is no daddy’s car girl.” Perception and reality don’t always align, as the road traveled by Sue to get to this point was far from a simple signature on a fat check by daddy.

The idiom that the apple doesn’t fall far from the tree certainly applies to Sue. As the oldest of three children, she recalls, “As a kid, I was always by my dad’s side when he worked on his cars. We would change the oil, filters, plugs, wires, and check fluids and tire pressure.” Her dad, Joe, did all the maintenance, and she was always there with him under the hood asking questions and saying, “Daddy, I want to do it.”

With the passage of time, the desire to get a license and a muscle car also started to manifest itself. A 1968 Mustang that her dad bought in the mid-’80s initially fueled that interest; however, she went through a few Chevys before arriving at her first Mustang. As Sue entered her 20s, she started asking for a Mustang for her birthday or for Christmas. “It became a joke through my 20s and 30s,” she recalls. “Friends would give me Hot Wheels Mustangs or Mustang models as gifts.” In 2009, for her 38th birthday, that all changed.

Her long wish was fulfilled when Tom woke her up and said, “Come on, we gotta go get your gift.” When she walked outside and saw a number of friends in a truck with a trailer, she knew there would be a Mustang coming home with her that day. Her husband tried to talk her down from all the excitement by saying, “Relax. It’s a hunk of junk and we have to go dig it out of this guy’s barn.” After a three-hour drive to New York, she was able to see her new acquisition. “Weeds were growing out of it, but it was a Mustang. She was a beauty to me! A 1966 coupe,” Sue recalls.

She finally had her Mustang, but it was in need of a major overhaul, so after it was loaded on the trailer it was driven directly to Red Alert Refinishing in Upper Darby, Pennsylvania. In a very short span of time, Sue pulled together the plans she had for her new acquisition. “We worked on it for two years,” she states. “I bought parts, picked a color, and decided on finishing touches. I wanted it to be modified and not restored to its original condition. I wanted it to be a show car, but I also wanted to drive it and enjoy it. I didn’t want it just sitting in my garage.”

Sometimes plans take a wrong turn, and in the case of the hardtop, it took an abrupt turn in the wrong direction. With the car being a month or so out from getting painted, Sue recalls, “At 4 a.m. one early morning in August of 2011, I got a call from my friend. A drunk driver had crashed through his autobody shop and my car was totaled, along with extensive damage to his paint booth, garage doors, and building. It was heartbreaking. All the blood, sweat, and tears that went into this car.”

Maybe the hardtop wasn’t meant to be, but Tom didn’t give up on making her wish come true. So, she explains, “On my 41st birthday my husband and friends secretly bought me another project car. My friend Carmen called me to ask what time I was coming to the shop to work. No one was in the office, or the shop, when I arrived. I walked out the back door, and there it was, a ’66 Mustang fastback roller with a big “Happy Birthday” sign on it! I was shocked. I couldn’t believe they did it and were able to pull it off behind my back.” Unexpectedly, the whole process started again. While she admits that she would have been content with the hardtop, she claims, “This fastback was the one I always really wanted!”

Since this one was a roller in primer, it was a blank canvas. Much of what Sue wanted to do to the hardtop would end up being done to this car, and there were quite a few hardware assemblies left over that would find their way onto this one. Red Alert Refinishing was once again the place where the rebuild on this car would take place. Once they started digging into the Mustang, one of the first things they did was eliminate the shock towers and mock the TCI Pro Touring IFS and also the TCI four-link rear suspension into place, which would support the 3.31-geared Ford 9-inch rear. After setting up the foundation it would ride on, they moved to the body.

When the car arrived at the shop, the existing bodywork that had been done to get it to the primer stage was a bit of a mystery, but as they worked on it they realized that it was well done, which saved quite a bit of time and expense to take it all back down. The quarter-panel–mounted scoops were integrated into the body. A Mustang Depot G.T. 350–style fiberglass hood was also added, and under that hood, the mounting point for the master cylinder and air conditioning were relocated, along with the plugging of all nonessential holes. A set of mini-tubs was installed at the rear, and it was well on its way to paint.

When it came time to lay down the paint, Sue opted to go with the same shade that was planned for the hardtop, so the guys at the shop laid down some three-stage PPG Radiance II Wineberry Pearl. Under the hood, the direction was quite simple. Sue opted for a small-block Ford 347ci turnkey crate engine from Proformance Unlimited in Melbourne, Florida. Rated at 425 hp, this combination was the perfect balance she was looking for in terms of performance and practical drivability. Shifting duties were left to a gift—literally. Her friend Jason was swapping out transmissions in his race car, so he gave her the one that came out of it, a C4 manual-shift unit with a 2,400-rpm stall speed converter. While all this work was taking place, Sue was spending evenings and Saturdays at the shop along with everyone else who had been enlisted to wrench on the car.

As the car came together, that pearl paint and planned lowered stance begged for some proper rolling stock. That came about with the installation of a set of Foose Nitrous wheels shod in Sumitomo HTR Z rubber. The last installment on the build was the addition of a custom interior. For that Sue took the car to Chris McClintock at Bux Customs in Pottstown, Pennsylvania.

This entire process spanned four years without any drunken mishaps, and once completed, Sue started hitting the local shows and collecting trophies with the Mustang. She is grateful for her husband not letting her dream die, and also admits, “I was blessed to have had lots of friends helping me in their spare time. It was a group effort.” When asked what she will do as an encore, she says, “I’m looking for a Fox-body as a daily driver and an older Mustang to build as a race car.” 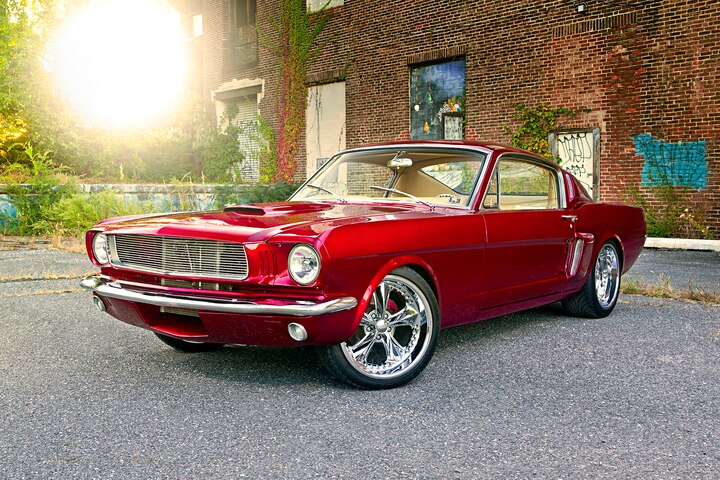 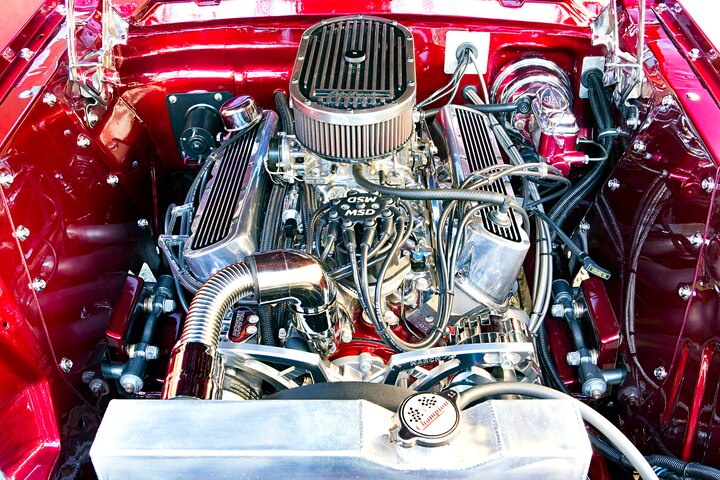 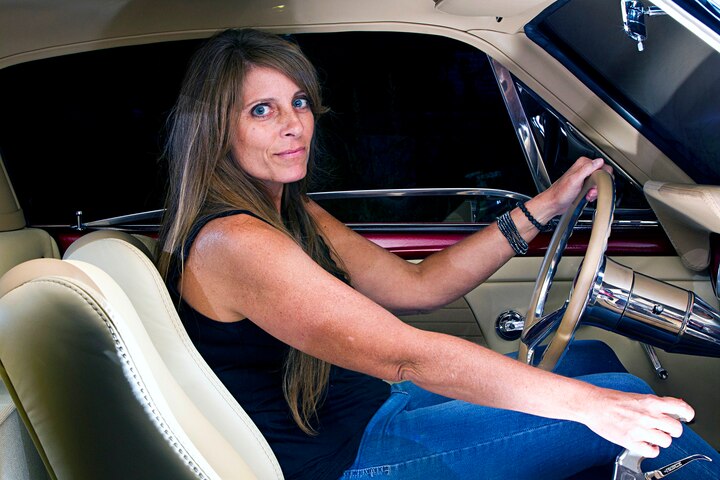