The therapeutic benefits of a hotrod 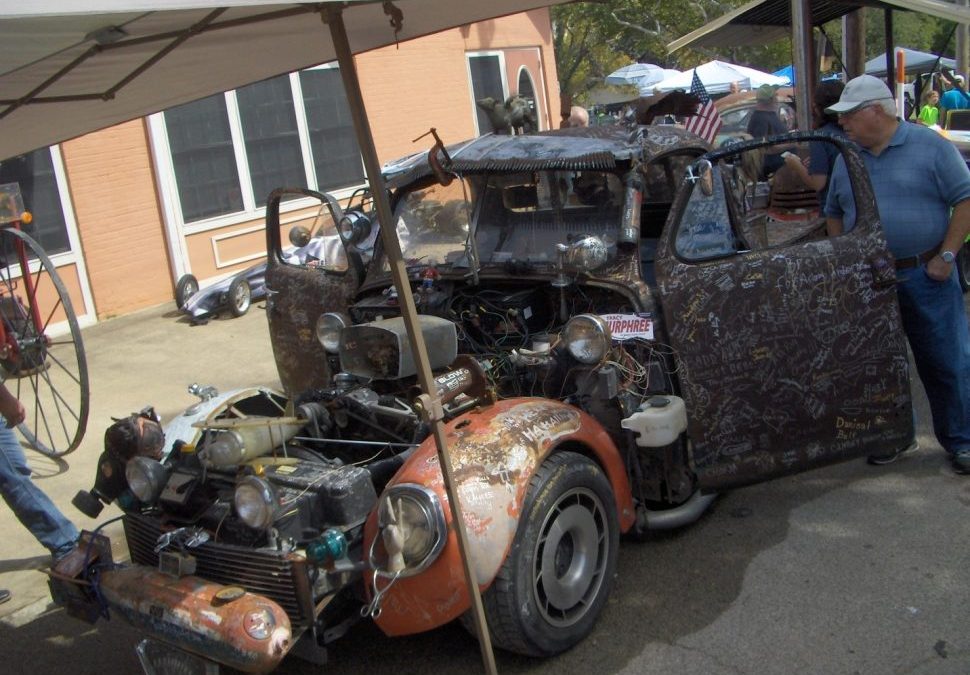 The therapeutic benefits of the far-from-perfect, anything-goes rat rod

Some see junk, I see treasure…art on wheels. Photos by the author except where noted.

Your first car may have been like mine. Rust everywhere, peeling paint, torn upholstery, smelly interior, worn out clutch, engine that burned oil…you name it, my 1951 Mercury had it.

That was about 60 years ago. You know what I miss today? Besides wishing I still had it, I miss not caring that the car was a mess. Even after treating the Merc to a $19.95 Earl Scheib paint job, which did little to hide bondo-covered rust holes, dents and other imperfections, I didn’t worry about making it look nice.

Everything I added — from fender skirts to chrome tailpipes — and everything I took off — from hood/trunk emblems and side chrome strips — was done for a purpose: to make the car mine. I was telling the world, “Look at me, you’ll never see another car like it.”

Since then, I’ve owned lots of new cars, kept them polished and obsessed over the usual things: dents, scratches, fender benders, bird poop, mud on carpets and seats, etc. It was all about keeping up appearances.

Then, about 25 years ago, I started seeing rat rods at car shows. They stood out like sore thumbs among the restored classics and hot rods. At first, I didn’t know whether I liked them. But in time, I realized these ugly-duckling creations had a therapeutic effect.

My blood pressure dropped each time I examined one. They reminded me that life wasn’t about perfection. Rather, it was about self-expression and fun. It was all right to have a less-than-perfect car. Slowly, my teen psyche was returning.

I enjoy the freedom from conformity that rat rods represent. They are an art form and express the owner’s creativity and individuality. Their owners told me many interesting stories.

Rat rod owners were the nicest bunch, too. A few years ago, an old guy at the Nocona, Texas, classic car auction told me about his rusted coupe that had a tractor’s grill and enormous engine with tall, chrome exhaust stack.

“What powers that beast?” I asked.

“That’s a Cummins truck diesel,” he said. “It has enough torque to pull stumps and it’s as fast as hell.”

I believed him. The ground shook and the stack roared when he started it. Now I understood why he was hard of hearing.

Rat rod owners are the nicest people you’ll meet, such as the man who built this Cummins diesel-powered beauty with an old tractor’s grill. We met at a classic car auction in Nocona, Texas.

For this man and many other rat rod owners, it was all about being rebellious and intentionally distressing their vehicles…everything society had taught me not to do. I had to unlearn so much.

Many rat rod owners previously built six-figure, pristine hot rods and classics that were show winners. They told me they were tired of maintaining and hauling them in trailers to shows. I asked a man at a McKinney, Texas, rat rod show what motivated him to build his creation.

“I built show-quality hot rods for years,” he said, “but seldom drove them. The fun factor was missing. So I went back to basics…to when I was just getting started in hot-rodding…and built my first rat rod. I went to junkyards looking for parts or traded with folks who had what I needed. Sometimes I built my own parts. The fun factor returned.”

The rat rods of my youth
Come to think of it, most of my high school friends owned rat rods. We didn’t call them that, of course. They were just beat-up stockers — jalopies, as my Dad used to say — “customized” with Moon hubcaps and fender skirts. A few were “souped up” with multiple carbs, headers, and more powerful engines bought at junkyards and installed in backyards.

A classmate removed the flathead straight-eight from his four-door ’54 Pontiac Chieftain and replaced it with a ’56 Olds V-8 sporting a four-barrel and dual exhaust. The engine hooked up to the Pontiac’s dual-range, four-speed Hydra-Matic. The big engine transformed the timid ride into a sleeper-rocket.