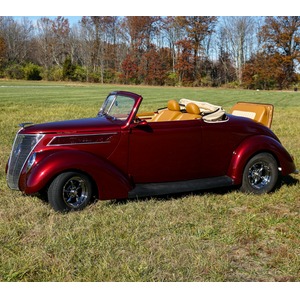 In 2014, I decided that I wanted to upgrade and rebuild a 1937 Ford Cabriolet that had been my father-in-law’s for over 20 years. So….I began with the engine and transmission. I contacted Performance Unlimited at the time in NJ. Steve worked with me to design the engine of my dreams for this car. We build a 383 Stroker using a GM 350 block. This engine is a standard 400 HP/500 ft. lbs of torque. The engine dynoed at 450+ HP and 520 ft. lbs. of torque. I couldn’t be more pleased with the build quality and the look of the engine. Now this engine sat on the shipping pallet for the next 2 years as I rebuilt all the mechanicals around the engine and finally dropped it in the car in 2015. On November 4, 2016 I started the engine and began the test runs needed to ensure the drive train ran correctly. I could not be more pleased with the performance of the engine. It is a “BEAST” to say the least in this car. I was very pleased with the support, discussions and direction provided by Steve along the way to ensure that the engine I wanted performed the way I wanted. That support was very much appreciated and contributed greatly to my following their direction as the installation and fine tuning progressed. The result……..I have a wonderful car with an incredible engine that I am very happy with and would encourage anyone seeking to build a custom engine to contact Steve or Doug. Also, Kim Attanasio was wonderful to work with as well. She worked hard to connect me with the people in the shop that could answer my questions as they came up along the way. Thanks so much. 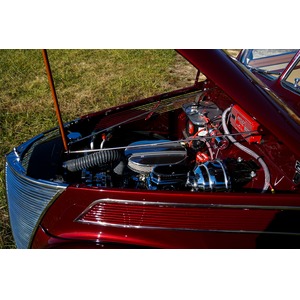